Zolgensma (Onasemnogene abeparvovec), commonly known as AVXS-101 and marketed under trade name Zolgensma, is a gene therapy drug used as a treatment for spinal muscular atrophy, a severe neuromuscular disorder caused by a mutation in the SMN1 gene, which in turn significantly reduces the amount of SMN protein necessary for survival of motor neurons. AVXS-101 is a biologic drug consisting of self-complementary AAV9 virus capsids that contain a SMN1 transgene along with promoters. The drug is administered intravenously or intrathecally; upon administration, the self-complementary AAV9 viral vector delivers the SMN1 transgene to cell nuclei where the transgene begins encoding SMN protein, thus addressing the root cause of the disease. It is thought that a single dose of the drug will have a lasting effect throughout the patient's lifetime.

The first phase I clinical trial using the product was done at the Abigail Wexner Research Institute at Nationwide Children’s Hospital. The drug has been further developed by a US biotechnology company AveXis, a subsidiary of Novartis. It was approved on 24 May 2019 in the United States by the FDA for use in children under 2 years. It carries a list price of US$ 2.125 million. 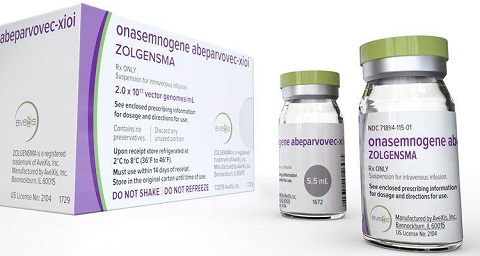