Adeno-associated viruses, from the parvovirus family, are small viruses with a genome of single stranded DNA. These viruses can insert genetic material at a specific site on chromosome 19 with near 100% certainty. There are a few disadvantages to using AAV, including the small amount of DNA it can carry (low capacity) and the difficulty in producing it. This type of virus is being used, however, because it is non-pathogenic (most people carry this harmless virus). In contrast to adenoviruses, most people treated with AAV will not build an immune response to remove the virus and the cells that have been successfully treated with it.

Several trials with AAV are on-going or in preparation, mainly trying to treat muscle and eye diseases; the two tissues where the virus seems particularly useful. However, clinical trials have also been initiated where AAV vectors are used to deliver genes to the brain. This is possible because AAV viruses can infect non-dividing (quiescent) cells, such as neurons in which their genomes are expressed for a long time. In recent human trials, CD8+ immune cells have recognized the AAV infected cells as compromised and killed these cells accordingly. This action appears to be triggered by part of the capsid or outer coat of the type 2 virus.

The AAV genome is built of single-stranded deoxyribonucleic acid (ssDNA), either positive- or negative-sensed, which is about 4.7 kilobase long. The genome comprises inverted terminal repeats (ITRs) at both ends of the DNA strand, and two open reading frames (ORFs): rep and cap (see figure 1). The former is composed of four overlapping genes encoding Rep proteins required for the AAV life cycle, and the latter contains overlapping nucleotide sequences of capsid proteins: VP1, VP2 and VP3, which interact together to form a capsid of an icosahedral symmetry.

The Inverted Terminal Repeat (ITR) sequences comprise 145 bases each. They were named so because of their symmetry, which was shown to be required for efficient multiplication of the AAV genome. Another property of these sequences is their ability to form a hairpin, which contributes to so-called self-priming that allows primase-independent synthesis of the second DNA strand. The ITRs were also shown to be required for both integration of the AAV DNA into the host cell genome and rescue from it, as well as for efficient encapsidation of the AAV DNA combined with generation of a fully-assembled, deoxyribonuclease-resistant AAV particles.

With regard to gene therapy, ITRs seem to be the only sequences required in cis next to the therapeutic gene: structural (cap) and packaging (rep) genes can be delivered in trans. With this assumption many methods were established for efficient production of recombinant AAV (rAAV) vectors containing a reporter or therapeutic gene (see figure 2). 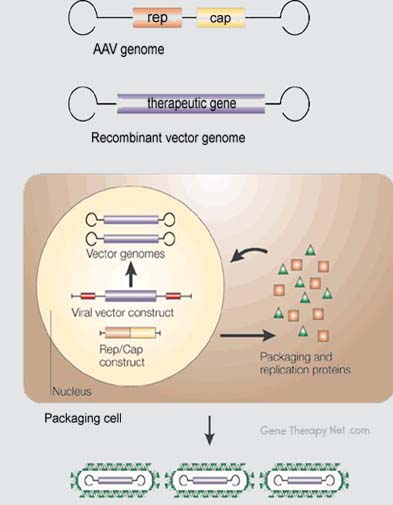 On the "left side" of the AAV genome there are two promoters called p5 and p19, from which two overlapping messenger ribonucleic acids (mRNAs) of different length can be produced. Each of these contains an intron which can be either spliced out or not. Given these possibilities, four various mRNAs, and consequently four various Rep proteins with overlapping sequence can be synthesized. Their names depict their sizes in kilodaltons (kDa): Rep78, Rep68, Rep52 and Rep40. Rep78 and 68 can specifically bind the hairpin formed by the ITR in the self-priming act and cleave at a specific region, designated terminal resolution site, within the hairpin.

The right side of a positive-sensed AAV genome encodes overlapping sequences of three capsid proteins, VP1, VP2 and VP3, which start from one promoter, designated p40. The molecular weights of these proteins are 87, 72 and 62 kiloDaltons, respectively. All three of them are translated from one mRNA. After this mRNA is synthesized, it can be spliced in two different manners: either longer or shorter intron can be excised, which results in formation of two pools of mRNAs: 2.3 kb-, and 2.6 kb-long. Usually, especially in the presence of adenovirus, the longer intron is preferred, so the 2.3-kb-long mRNA represents so-called major splice. In this form the first AUG codon, from which the synthesis of VP1 protein starts, is cut out, resulting in a reduced overall level of VP1 protein synthesis. The first AUG codon, which remains in the major splice, is the initiation codon for VP3 protein. However, upstream of that codon in the same open reading frame lies the ACG sequence, which endcodes threonine, but is surrounded by the optimal Kozak context, that contributes to a low level of synthesis of VP2 protein, which is actually VP3 protein with additional N terminal residues, as is VP1. Recently, a new protein has been identified as AAP (assembly-activating protein) that is involved in assembly of the viral particle. This AAP protein is coded out of frame starting in VP2.

Since the bigger intron is preferred to be spliced out, and since in the major splice the ACG codon is a much weaker translation initiation signal, the ratio at which the AAV structural proteins are synthesized in vivo is about 1:1:10, which is the same as in the mature virus particle. The unique fragment at the N terminus of VP1 protein was shown to possess the phospholipase A2 (PLA2) activity, which is probably required for the releasing of AAV particles from late endosomes.