A retrovirus is any virus belonging to the viral family Retroviridae. All The genetic material in retroviruses is in the form of RNA molecules, while the genetic material of their hosts is in the form of DNA. When a retrovirus infects a host cell, it will introduce its RNA together with some enzymes into the cell. This RNA molecule from the retrovirus must produce a DNA copy from its RNA molecule before it can be considered part of the genetic material of the host cell. Retrovirus genomes commonly contain these three open reading frames that encode for proteins that can be found in the mature virus. Group-specific antigen (gag) codes for core and structural proteins of the virus, polymerase (pol) codes for reverse transcriptase, protease and integrase, and envelope (env) codes for the retroviral coat proteins (see figure 1).

The process of producing a DNA copy from an RNA molecule is termed reverse transcription. It is carried out by one of the enzymes carried in the virus, called reverse transcriptase. After this DNA copy is produced and is free in the nucleus of the host cell, it must be incorporated into the genome of the host cell. That is, it must be inserted into the large DNA molecules in the cell (the chromosomes). This process is done by another enzyme carried in the virus called integrase (see figure 2). 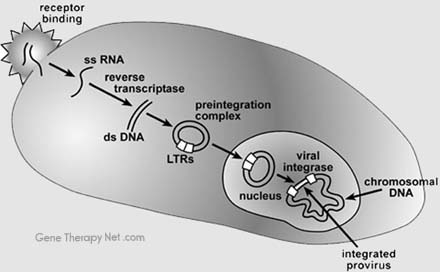 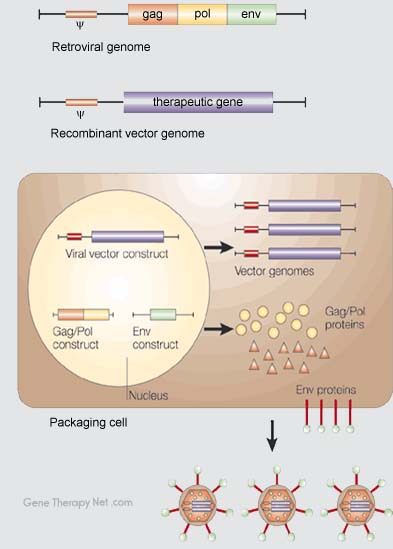 
One of the problems of gene therapy using retroviruses is that the integrase enzyme can insert the genetic material of the virus in any arbitrary position in the genome of the host. If genetic material happens to be inserted in the middle of one of the original genes of the host cell, this gene will be disrupted (insertional mutagenesis). If the gene happens to be one regulating cell division, uncontrolled cell division (i.e., cancer) can occur. This problem has recently begun to be addressed by utilizing zinc finger nucleases or by including certain sequences such as the beta-globin locus control region to direct the site of integration to specific chromosomal sites.

As a reaction to the adverse events in the French X-SCID gene therapy trial, the Recombinant DNA Advisory Committee sent a letter to Principal Investigators Conveying RAC Recommendations in 2003. In addition, the RAC published conclusions and recommendations of the RAC Gene Transfer Safety Symposium in 2005. A joint working party of the Gene Therapy Advisory Committee and the Committee on Safety of Medicines (CSM) in the UK lead to the publication of an updated recommendations of the GTAC/CSM working party on retroviruses in 2005.